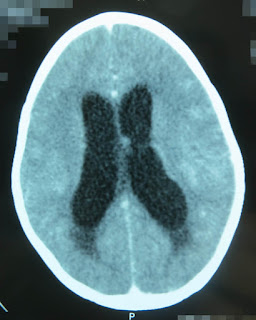 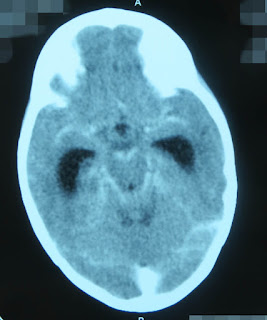 This was case of the day on Friday.  What do you think?


Tumor board was well attended this morning, with the consultant hematologist/ oncologist running the hour.  Attending level physicians are called consultants here, which seems appropriate, given that they spend a couple of hours providing patient care at each institution they serve, a couple to a few times per week.  They spend the rest of their time shuttling around to care for private patients in private hospitals, who help to pay the bulk of their salaries.
In any case, the first case at tumor board was a 14 year old boy who presented with chest pain and hemothorax, who underwent thoracotomy for diagnosis of his Non- Hodkin's lymphoma. He had incompletely responded to chemotherapy, and was brought up for discussion for the possibility and utility of a repeat biopsy.  Given the mass was plastered against the anterior chest wall, I thought it would be possible under ultrasound guidance.  My attending, Marc, and I brought this up for discussion, and the idea was very well received.

It made me realize, again, how different the practice patterns are here, and how that takes time to change clinical behavior.  The Kenyan radiologist in attendance, who is less procedurally oriented, was of the opinion that it would be unsafe, given the mass' proximity to the pericardium.  Since there is a lack of people willing and able to provide this kind of service, most things are done surgically rather than by less invasive means, as we are used to in many centers in the US.  Given the suggestion and available expertise, the clinical dilemma of getting tissue or not becomes much easier.  I hope this young man comes in in the next couple of weeks so that we can do the biopsy with the registrars.
The second case was of a huge maxillary mass you would have to see to believe.  As with many of the patients I've seen, going to the hospital is the absolute last resort, and various homeopathic therapies had been attempted, scarring the skin overlying the enormous protuberant mass, which displaced her nose rightward and splayed her teeth widely apart.  On CT, the mass was clearly bone- forming, although the pathologists had called it a mucoepidermoid tumor.  We questioned the diagnosis, as the appearance was more compatible with something like a chondrosarcoma or osteosarcoma, although the differential is broad.  Staging using a chest x-ray was discussed.  There is no such thing as a staging chest abdomen and pelvis here, like we do every day at Rhode Island Hospital.

Tomorrow promises to be my most scheduled day yet.  I'll give the first of many morning lectures to the radiology registrars at 8:30, since they're back from exams.  I have pending consults for a possible pancreatic biopsy as well as percutaneous nephrostomy tubes.  After lunch I will meet with Wyclif, the Swahili teacher, who also happens to know sign language.  He is going to help me speak with the IU House carpenter, so that we can build a camera stand for one of the outlying AMPATH clinics.  This is part of an attempt to centralize reading of chest x-rays taken at these remote locations, so that they may be uploaded to an online database, to hopefully be read by a radiologist.  At this point, less than half of the radiographs are read.  One of the many issues is lack of man- power, as there are something like 140 radiologists for all of Kenya, population 41.6 million.  Contrast that with over 50 attending radiologists in Rhode Island Medical Imaging, serving just part of Rhode Island's 1 million residents.

Today Lauren and Ada, a couple of AMPATH IT staff members living at the bed and breakfast with me, attended a goat roast hosted by their co-worker Wynn, who had slaughtered the goat himself earlier in the day.  I secretly wished I had been invited.  Maybe that's what I was smelling as I trotted over the goat trails earlier this evening...